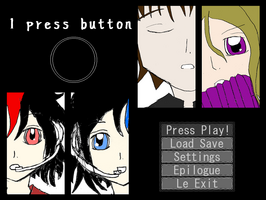 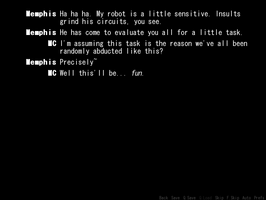 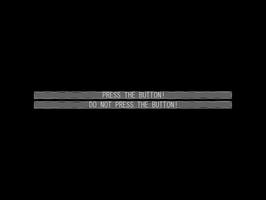 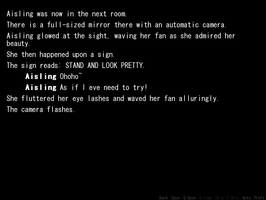 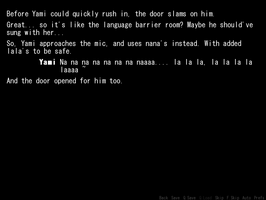 After crunching to get this little project in working order, I proudly present to you my team's entry for this year's So Bad, It's Good! Jam....

Now coming up with something for this year's modifier took a lot of creativity. The modifier (or theme, if you will) was "one button". Obviously that could commonly lead to clickers, but I love twisting prompts, and so I decided to use it as a plot point! Aside from the obvious, there's an extra interpretation to the modifier if you get to the true ending!

One thing I enjoy about making an SBIG game is I get to experiment. Although this is a super short "visual novel" (more of a text based game in this case, there's no images aside from the menu), I managed to get a huge amount of outcomes. Perhaps after jam's end, I'll update the project with an ending gallery. I also love how I can let my voice actors go wild--I usually give them very little direction and allow them to surprise me. This year, I definitely was not disappointed, haha! And I don't think you will be either~

Then there's also playing around with some RNG with the renpy.random function. I wanted to add some pseudo-difficulty dictated by pure chance. There's not many choice menus in here, and you'll find even the non-menu areas that will not always have the same outcome in your next playthrough because it triggers renpy.random to decide what label it jumps to. I also on a few clusters of voiced lines I could not decide which take I liked better, I used renpy.random in order to implement them both--so certain particular lines may be said a little differently in other playthroughs. I wanted to make this short game super replyable, so be sure to save often in vital spots!

I also did a bit of art this time around... quickly drew sketches of the MC and Aisling, but the Yume twins I am using my first ever sketch I drew of them because I was too lazy to make a new drawing due to the time crunch. Ah yes... this game actually features already existing characters! MC is from my April Fool's game, Muted. which was also quite an experiment project, and his VA reprised his role. The Yume twins, Yami & Hikari, are my very own UTAU voicebank that is available for free if you use UTAU! I am their voice provider, so of course, I voiced them in-game as well which was fun. I was gonna render a little singing snippet, but did not have time to fiddle with making a .ust so I just actually sung in their ranges which was a lot of fun so you get an idea of what they'd sound like as a human and not a vocal synthesizer.

The characters that are brand new to this game is Lady Aisling, whom is voiced by one of my artist friends tashaj4de! She helped me pick out a name for her. And of course, the lab coat Memphis and his robot is unique to this game too. Tasha is actually the game's cover artist as well, but we could not get that finished on time--she did make the sketch last night and you're in for a treat once it is finished!

All in all, I am quite proud of this year's project. It's my team's third time participating in this jam, and it has been very helpful to me to relax, have fun, and overcome writer's block which is vital for me to get back to my serious projects. I do hope you all enjoy this game and its quirks, just as much as we did making it!

Survive the trials. Press the button!