"You're a bard. Heroes come to commission you to write dramatic lyrics detailing their adventures for you to sing about to any audience willing to listen--be it in the streets, in a tavern, walking through the forest randomly, etc. The job pays well and you're good at what you do. People love listening to your musical tales, and it helps the hero gain fame.

....how do you musically spin a yarn when the hero in question is such a pathetic excuse for one?

You've been tasked with one of your most difficult commissions yet! A (wannabe) hero-for-hire has asked YOU to write about his (mis)adventures to better his reputation! However, you have a "don't embellish with false details" policy, and this guy's failed attempts at heroics isn't giving you much to work with.

Oh, WHY did the pay have to be SO GOOD on this commission? And where'd he get all this coin, anyway?!"

FEATURES:
- Very simple rules
- A hero as pathetic as you want him to be
- You get to practice your poetry skills

MATERIALS NEEDED: Pen or pencil, a notebook, blank index cards, and 2 six sided dice. If you do not have any index cards, here's a guide of 2 alternative methods you could do for prompts..

The Ballad of a Desperate Hero is a comedic solo TTRPG where a bard attempts to write a good song (or poem) to positively boost a flopped hero's renown. The challenge is trying to salvage and magnify anything "good" from the hero's many failed ventures (no matter how tiny) in order to weave any lyrics to make the hero sound better-ish. And since the bard isn't a liar, the results may be a lot of "he couldn't slay the dragon, BUUUUT, he pulled a kitten out of the way of its flames!"

The game ends when you've written enough convincing songs to bring the hero's renown to 50. Or you can rage quit and tell the hero he's a lost cause. 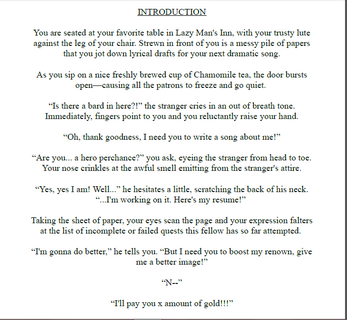 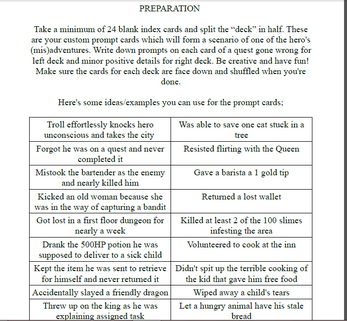 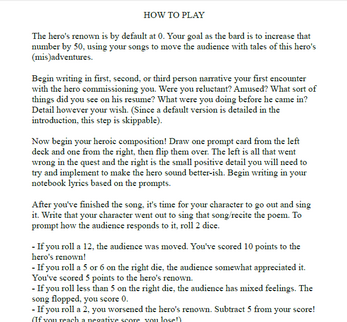